Everyone at GCDF wishes
you a very
Happy Holiday
and a wonderful
New Year
full of dance!

Visit us back here after January 19
for more stories of dance and the dance community.
Posted by Guelph Dance at 08:00 No comments:

Jillian Cockburn: The GCDF, Diversity, and Me

Jillian Cockburn, GCDF's 2010/11 publicist and writer, lives in Guelph and is currently on mat-leave. You can also check out her blog. We welcome Jillian's insight here!

Jillian: In January 2010, my husband, Lucas, and I moved to Guelph after two months of backpacking through Europe and Central America.  Our stay in Guelph was supposed to have been brief; following the completion of Lucas’ work contract, our plan was to continue traveling ... indefinitely.  After only one month of being here though, we felt at home.

For me, the major draw was the city’s thriving arts community.  In those first few months, I made a point of experiencing as much as I could of what Guelph had to offer in terms of arts and culture.  And then in June, I experienced my first ever GCDF festival weekend.


What immediately struck me was the GCDF’s commitment to and celebration of diversity --- both in terms of dance works that were being presented and the representation of artists.  As a former Torontonian, I never would have expected to see such a wide range of dance offerings featuring artists from across Canada (and around the world!) in a city of Guelph’s size.  It was both surprising and reassuring.  I knew right away that I wanted to be a part of what the Festival was doing.


In September 2010, I had the pleasure of joining the GCDF as both the company’s contract Publicist/Editor/Writer and Fundraising Coordinator.  Having the opportunity to be a part of a top-quality festival that embraces and promotes diversity in dance, pushing the boundaries of what this art form can mean and do for a community like Guelph, has been nothing short of amazing.  And though I’m currently on leave, I look forward to experiencing the 2012 Festival with “my little one,” and sharing with her all that the GCDF has to offer!
Posted by Guelph Dance at 08:00 No comments:

The Fine Art of Curating

Catrina: While much of my time as the General Manager of the festival revolves around grant-writing and securing funds to make it all possible, without doubt, my favourite time of the year is when I can put all number-crunching aside and devote myself entirely to being one of the co-artistic directors of the festival and to viewing the 80-100 applications we receive each year.

The GCDF posts a Call to Artists with a deadline of September 15th. We also travel across the country to view as many performances live as possible and to engage in discussions, panels, and professional development.  In fact, I wrote this post as I was on a train on my way to Montreal for the Parcours Danse Conference hosted by La Danse Sur les Route du Quebec and recently went to Calgary for the Fluid Festival and CanDance Network AGM.


Though the video-viewing and travelling to see works can be great, great fun, this time of year can also be one of the most difficult. Out of the 100 applications, only 24 artists get selected (6 for the On the Stage, 2 for the In the Studio, 4 On the Street, 4 In the Park and 8 Youth Moves series artists), we have to decline many very, very strong applications.


So how do we make our choices?

Janet and I view the submissions separately so as not to influence each other. We try to give each submission our equal time and attention. We take notes, we make scores, and we allow the work to resonate. Choosing pieces is not as simple as picking our personal favourites. We truly want to represent the national dance community. We try to choose artists from at least 3 provinces each year while also representing the local dance scene.  Our choices must represent our nation’s cultural diversity (the GCDF has represented dance from a wide range of cultural backgrounds and influences), an eclectic mix of dance styles (urban, innovative contemporary, improvisation, aerial dance, physical theatre, modern, etc…).  And the works have to work well on a mixed program (for example, three solos could feel long, but a mix of solo, duet, trio and group work becomes much more exciting).
Creating a program that incorporates as many of these criteria as possible while also ensuring the strong programming you have all come to know and trust is indeed a challenge, but something both Janet and I cherish as part of our jobs as co-artistic directors.

Janet: Curating ... a joy and an utter heartbreak!  It is incredibly stimulating to see packages from across the nation (and other parts of the world) filled with powerful passion, determination, conviction and artistry.  I feel that each package is a little gift, a message from an artist, a way of looking at dance, the world.  I try hard to honour this and view packages when I am alert and will only view a few at a time before taking a break.  I often know which pieces "work" by how long they resonate in me, how often they come into my imagination, my visual musings.
There are some tough parts like loving a work but not necessarily thinking it is right for this year's festival for a number of reasons.  It is also potentially super-difficult when works come from a  personal as well as professional connection (much of the greater dance community is made up of links such as these...) ... When we just don't have the cash to bring the bevy of amazing talent that comes our way ... When we are well aware that an artist or company "needs" a gig like the GCDF to grow and be reinforced for what they do.

Curating annually gives me a great sense of what's out there at this time, what themes, movement motifs, styles are at the forefront, what artist is investigating what territory, collaboration, etc.  I feel honoured to wear such a hat and am incredibly motivated to bring to the Guelph "table” a diverse, highly skilled, challenging, heart-felt feast of dance.
Posted by Guelph Dance at 08:00 No comments:

Email ThisBlogThis!Share to TwitterShare to FacebookShare to Pinterest
Labels: Choosing Dance Works for a Show, Curating a Festival, Dance Festivals

Robert Kingsbury at the CSA Nooner

On Wednesday, November 23, Robert Kingsbury performed as part of the CSA Nooner at the University of Guelph. We asked him to describe his experience.

Robert: My first piece of choreography as an adult was site-specific. I was studying music at York University and in an attempt at taking dance classes again, I found myself in site-specific choreography. The class culminated in a showing that toured the concrete jungle campus, stopping in places that the students had chosen for choreography. In studying this type of work before entering the realm of formal dance & technical training, I immediately began to see human movement as part of a larger context and environment. In site-specific work, the choreographer seeks out places where they think that they can make moments happen. For the CSA Nooner, the location is predetermined and so it's more of a case of bringing dance to an environment where it may be surprising.

Some people feel that to present dance in a public space tells people that they can look at art the same way that they look at a water bottle or shoelace. I think that the journey towards embodiment is accessible in every place, every moment and through any kind of interaction so this kind of work excites me. I feel as a choreographer a lot of my time & skill goes into sensing my environment. Through site-specific work I feel that my sense of being can be useful in having an affect on the space. For the Nooner I picked the flight of 6 steps facing away from the audience's seats. To make choices that go against audience expectations is one of the first rules. 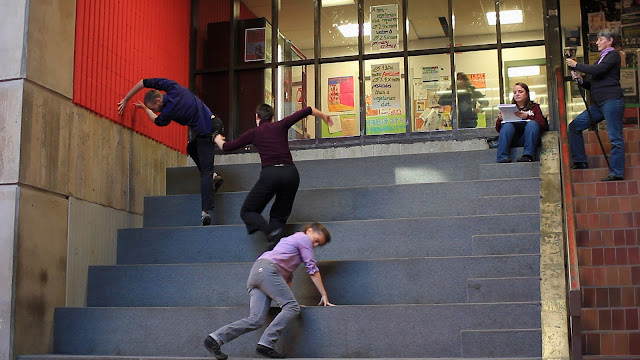 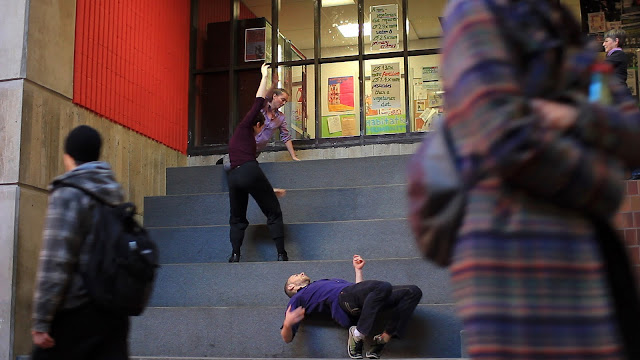 The piece that I remounted was originally presented in a parquette just north of Queen & Yonge, in Toronto. This was a place that reeked of urine and was not maintained. I took photos of all of the litter, printed them and put them throughout the space during our performance. As a trio, we did a half hour meditation that moved along the surfaces of the space in an attempt at bringing some gravity and thoughtfulness to the environment. People who frequented the space interacted by joining us in climbing the structures of the parquette as though it were a playground. A man peed in the direction of the performance, but did it in a way that said 'this is what I do here'. We did not take offence, in fact a viewer cried at their perception of what seemed ironic and beautiful.


Needless to say the performance at the University Centre was less interactive. The students that I observed seem shy and in a rush. A little bit of this energy made its way into my performance too. I had set a strong intention to interact with the other dancers and be open to the audience, but felt a little less present than I like to be. Being raised above the audience disconnected me from them. In a theatre, they are usually raised above you. That day I was reminded of the frantic sense of disembodiment I experienced during University. This was for me, the major reason I started dancing again. Full circle.
Posted by Guelph Dance at 08:00 1 comment: